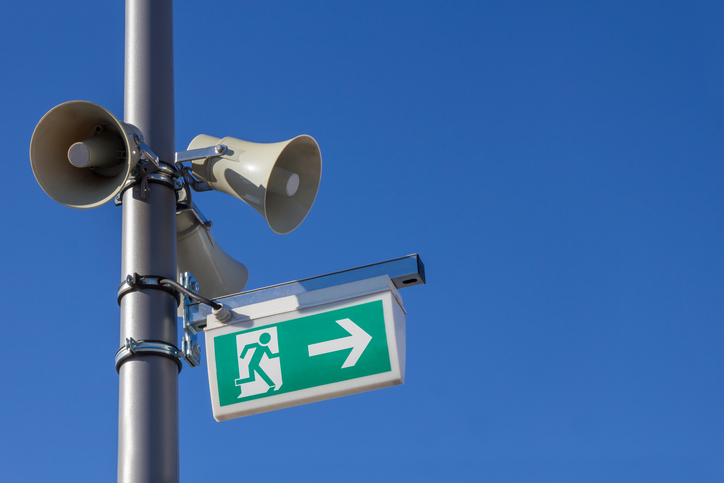 Before the people in your building can lock the doors, call 9-1-1, or kick their ALICE training into action, they need to know something is happening. That gap—between the Very Bad Thing beginning and the people most at risk knowing about it—is painfully long. It is also the period during which most casualties occur in an active shooter event. Closing that gap means preventing more injuries, saving more lives, and using Mass Notification Emergency Communication systems.

There is one basic mass-notification system that we’re all familiar with: The fire alarm.

If the occupants of the second floor don’t hear anything about a ground floor fire until its bad enough for them to smell the smoke and feel the heat, they are in serious trouble. That’s why we have alarms that go off building-wide at the first sign of a fire.

Fire alarms are a simple tool because the strategy for surviving a building fire is straightforward: Leave the building. Active shooter and armed intruder scenarios pose much greater challenges. Different people in different parts of the facility need to adopt very different strategies. This is why, in 2010, the National Fire Protection Association (NFPA) shifted from talking about “Fire Alarms” to talking about “Fire Alarms and Signaling”—and specifically Mass Notification Emergency Communication (MNEC) systems.

But many buildings have been slow to upgrade to a real MNEC. One of the major stumbling blocks is a fundamental misunderstanding. Put simply:

A building-wide paging/intercom system is not a Mass Notification Emergency Communication (MNEC) system!

The core issue is coherence.

An intercom or paging system is a pretty casual affair: A microphone and amplifier wired to speakers throughout the building. Anyone can wire one up. Some work great. Many do not.

An MNEC system is a different beast. It must surpass strict coherent and loudness benchmarks. These include the STIPA (Sound Transmission Index for Public Address) intelligibility criteria and a minimum level of loudness set by NFPA: At least 10 decibels louder than the background noise level in private spaces, and 15 decibels above the ambient noise in public spaces.

Having an understandable system is obviously a challenge—we’ve all wondered what the heck someone just announced over a PA. But these loudness requirements make it even trickier. A normal office hovers around 60 decibels (dBs), so the MNEC needs to be at about 70dBs. That’s roughly the volume most people set their TVs at. But a school cafeteria regularly exceeds 100 dBs, meaning the MNEC needs to be as loud as a chainsaw while still being perfectly intelligible.

With that said, an MNEC system isn’t just a loud intercom that you can actually understand. Every MNEC must have at least four critical qualities:

“In short,” explains David Smith, vice-president of marketing at Lencore Acoustics, “You need to be reasonably certain you’ll reach—and be understood by—100% of your audience 100% of the time.”

Lencore has been designing and engineering building-and-campus-wide audio distribution solutions since 1990. They started out focused on sound masking, paging, and background music. In 2007, Lencore founder Jonathan Leonard saw the Virginia Tech shooting unfold on the news. Leonard asked himself how his audio systems—which were already installed in many public buildings to custom deliver clear sound throughout a facility—could be leveraged to create emergency notifications. Over time this evolved into Lencore’s current flagship mass notification solution, n.FORM.

In an age of complex threats—such as an active shooter event—you need to do more than just warn 100% of the people 100% of the time. You have to intelligibly deliver the right instructions to the right people 100% of the time. People at one end of the building might be best advised to evacuate, while those in the other end should shelter in place. That’s why NFPA mandates that “the emergency voice/alarm communications system must have the capability to broadcast live voice messages by paging zones on a selective and all-call basis.”

Another feature that NFPA allows—but does not yet specifically require—is override.”I know it’s a sensitive subject,” David Smith explained, “but internally we talk often about the recent Parkland incident, and also the Washington Navy Yard shooting that occurred in 2013. When a gunman walks into a building, the first thing they often do is pull a fire-alarm. That does two things: It opens up all the doors—potentially breaching the building’s overall security to allow in accomplices—and it drives all of the occupants out into open corridors, where there is no cover. NFPA 72 now allows for mass notification to override the fire alarm control panel and yield the system to a mic or pre-recorded message that warns the occupants of the true nature of the threat. This capability is very, very important, in terms of saving lives.”

Since 2012 the International Fire Code has required educational occupancies to have “emergency voice/alarm communication system […] designed and installed in accordance with NFPA 72.” The most recent version of NFPA 72 similarly expects schools to have MNEC-like systems in place.

Nonetheless, few have yet put these in place. “This is an unfortunate reality,” Smith allows. “It comes down to a couple different factors. The first is awareness. No one is ever trying to skirt the codes and suggestions. It’s just that few people have these distinctions top of mind. The second, unfortunately, is cost. Many people are very constrained by their budget. Fortunately, when you put a good MNEC system in place, you get more than mass notification: you get sound masking, you get background music, and you get paging. All of these come together to make for a more pleasant building environment, a more productive space, every single day. You can leverage that, and enjoy its value, throughout the year—not just in the event of an emergency.”

As David Smith concluded, “We want to save lives, and we also want to make lives better on a daily basis. We think it’s important for any facility to be able to take care of its people. The audio environment that you’re soaking in every day can be a big part of your sense of well being.”