Bulletproof Glass for Schools in 2022

In the spring of 2021, many schools began in-person learning again for the first time since the start of the pandemic. According to the Washington Post, "a disturbing surge of campus gun violence … unlike any other in modern U.S. history" followed. Despite thousands of elementary, middle, and high schools only being partially open, there were at least 14 school shootings that spring. It was the highest total for that period since 1999 (when the Columbine High School massacre marked the start of the modern era of mass school shootings).

As the Post noted, Spring 2021's "on-campus incidents … happened in 12 different states, and prove, once again, that no place is immune: five in rural towns, six in cities, three in suburbs; the communities were poor, middle-class and affluent; some schools were mostly White, others mostly Black."

This trend continued when schools reopened the following fall for their first fully in-person year of classes since the pandemic began. In November of 2021, Adam Urbanski, president of the Rochester Teachers Association, told US News and World Report that "the pandemic clearly appears to have contributed to a substantial increase in violence and a lack of safety.”

Trends in School Violence and Security

It's important to note that most school violence does not involve firearms. But given the severity of a firearm incident in a school and the higher bar acquiring a firearm sets for the perpetrator (when compared to so many other lethal objects that can be found in the home), gun violence is an important metric for gauging overall school threat levels.

According to the Center for Homeland Defense and Security’s K-12 School Shooting Database, there were 123 incidents of gunfire on school property in the United States in the first three months of the 2021-2022 school year. For comparison, during that same period in 2019 (the last year most schools were entirely in-person), the Center for Homeland Defense recorded only 40 such incidents.

“We are seeing dramatically more shootings than at any other point in our dataset,” David Riedman (criminologist and creator of the K-12 School Shooting Database) told reporters. This has predictably driven more schools to look into installing bulletproof glass and access control solutions.

Most schools increase security with a "secure vestibule" renovation—a security strategy Total Security Solutions pioneered almost a decade ago. In a secure vestibule, TSS modifies the existing entryway to increase security and offer access control. The exterior doors are generally left as is, while the interior doors are replaced with bulletproof glass security doors. A ballistic glass transaction window is then added to the wall of the entryway, between the outer and inner doors. Visitors can freely enter through the exterior doors but must then check in with receptionists through the secure transaction window before being "buzzed in" to the building.

Although schools have often favored lower security levels for their secure vestibule systems, TSS has seen Level 3 bulletproof glass become the norm over the last several years. Level 3 materials are capable of stopping multiple shots from any sort of handgun and some smaller caliber rifles.

Schools tend to favor either LP1250 ballistic polycarbonate or glass-clad polycarbonate (GCP) bulletproof glass. Both of these are laminated materials that include polycarbonate, as well as glass or acrylic. This offers a balance between good light transmission and aesthetic flexibility and performance. Some of TSS's Level 3 LP1250 formulations offer not only bullet and forced-entry resistance, but have been verified to withstand combinations of the two. For example, the LP 1250 All-Poly has passed WMFL Level 1 testing. This means the bulletproof glass has been shot with 24 rounds from a .44 Magnum and then battered for 60 minutes with a claw hammer, cold chisel, sledge hammer, iron pipes, rebar, and a fire extinguisher, prior to being burned with a propane torch—and yet still was not breached.

Some schools are choosing to take their security a little further than the vestibule. For example, they may install GCP in some exterior windows if there are issues with vandalism or forced entry. It is also increasingly popular to replace some interior doors with bulletproof doors crafted to perfectly match the existing doors throughout the buildings. This allows the school to compartmentalize, creating many small safe-haven "panic rooms" in case of emergency.

How Are Schools Choosing the Best Solutions?

Bob George is a senior consultant with Total Security Solutions. He recently completed work on security vestibules for a set of four Catholic schools in Eastern Pennsylvania.

"These give a good idea of what schools are doing now," he explains. "Protection and peace of mind are always front and center, of course. But after that, it always comes down to three things: budget, aesthetics, and functionality. And on top of it all is the timeline. That’s another big thing, especially with schools where summer break keeps shrinking and other renovations are often happening during that little window of time."

In this case, the schools went with bulletproof aluminum "storefront" doors and an aluminum voice-around transaction window built into the adjacent wall. They opted to use a "low-spall” GCP bulletproof glass for most of the system. This is an extremely robust security glazing, capable of withstanding that multi-step, multi-shot, hour-long forced-entry attempt outlined above.

But here, GCP was selected for more practical reasons, according to Bob George: “In a high traffic area in a high school, a thousand kids are going to put their hands on those doors every day. A glass-clad product like that is going to stay looking good much longer because of the hardness of that glass outer layer.”

This door system is a good example of what a modern ballistic security door for a school should look like. On the surface, they are indistinguishable from the front doors of any school in the nation. But these doors are extremely durable, well-armored against forced entry, and include integrated access control and electric panic bars. 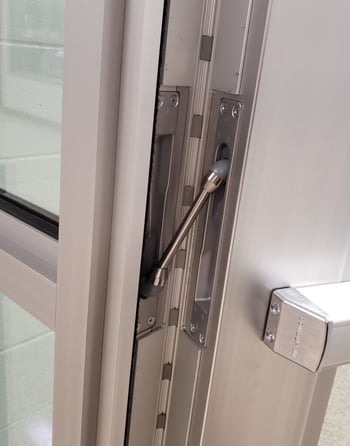 According to Bob George, TSS has “been seeing more and more of this, running power through the door rather than the jamb." Most electric strike access control systems wired through the door jamb only work with single doors, which creates a bottleneck at the entrance. That's annoying during regular daily operations, leading to "traffic jams" during passing times. And it can be dangerous in an emergency when the building needs to be quickly evacuated.

Wiring power through the door itself, while trickier, opens up the possibilities, allowing for electric panic bar double doors like these. That means fewer "traffic jams" at the beginning and end of day, and allows for easy exit in case of emergency.

"But not a lot of companies have the ability to do stuff like this," Bob George notes, because it requires fabricating the doors and frames to accept an “EPT” (or "electric power transfer," highlighted in the detail above).

“That’s always kind of set us ahead," Bob George notes. "We can do more custom work because we don’t have as many restrictions and limitations. [TSS CEO] Jim [Richards] grew up in this industry doing this work himself, and so on our production side, he really trained them. We still have a lot of core guys that have been here a long time and really know their stuff. No one else really has the capabilities we do, because they don’t have that experience base.”
Experience in More than Bulletproof Glass and Doors
TSS clients benefit from more than TSS's design and fabrication experience. They also get the benefit of Jim's decades of experience in ballistic security and TSS's institutional knowledge when it comes to trends in gun violence and safety in American life.

“Yes," Jim allows, "I think that, overall, in schools we’re seeing an uptick in interest in security barriers recently. But we need to put that in context: in reality everyone is on edge right now. First it was two years of pandemic, and then the economy taking a nose-dive, and then a war. Just think about how much time we’ve had for uncertainty. And with kids it’s amplified, but in general, people don’t deal well with uncertainty. I think that’s perpetuating a lot of what we’re seeing, in workplaces and schools. And people are forced to react to it, even if the threat feels remote, so that their people—their students or teachers or workers—feel less uncertain and can kind of calm down.”

TSS designs, fabricates, and installs bulletproof solutions for schools that balance safety, cost, and student comfort. We can retrofit a bulletproof barrier system into your existing building and install it quickly over breaks or summer months. Reach out to one of our ballistic experts or download the checklist for more information on bulletproofing school entryways.