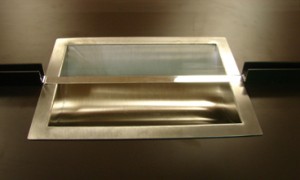 While you can build a box-style bullet proof deal tray from individual welded sheets of metal, that’s far from the best process: Each of those welded joints is a possible point of failure, and the welding process runs the risk of unpredictably weakening the metal itself. In order to minimize these failure points, top-notch bullet proof companies fabricate their deal trays from a single bent sheet of 18 gauge stainless or armor plate steel.

THE DEAL TRAY WITH ENHANCED SECURITY

For added security a deal tray can be equipped with a concealed “bullet trap.” In such deal trays a direct shot is meant to pass through the surface of the tray–which deforms the bullet and saps its momentum–so that the projectile can be safely caught in a concealed stainless steel tray.

If a given setting cannot accommodate a full bullet trap, customers might opt for a deal tray with an anti-ricochet scoop. These deal trays are flat-bottomed, instead of having the full parabolic curve of a standard deal tray. This modified scoop makes it much harder for a gun-totting thief to score a lucky “bank shot” past the bullet proof glass.

Forming a deal tray while minimizing weld points is largely a job for a skilled tradesman using an industrial CNC hydraulic press break with a full set of interchangeable presses and dies. This represents a hefty capital outlay that’s beyond the reach of many small bullet proof companies. Subsequently, they outsource their deal trays, limiting their offerings to the few prefabricated trays stamped out by the hundreds of thousands in a Chinese factory.

Rather than limit themselves to these pre-fab trays, a fledgling bullet proof company in rural Michigan–Total Security Solutions–customized a set of existing hand-operated box-and-pan breaks they already owned. Creating a set of custom jigs and dies, and adding foot-actuated pneumatic air cylinders to power the presses, made it possible for Total Security Solutions to offer competitively priced pro-quality bullet proof deal trays without resorting to offshore manufacturers.

As they’ve grown, Total Security Solutions has invested in top-of-the-line computer-controlled equipment, but still retained their older tools and institutional knowledge, which has allowed them to distinguish themselves with fast delivery times and non-nonsense customization. Total Security Solutions can still accommodate cost-conscious customers with standard needs (the concert ticket office, the gas station that needs to pass cartons of cigarettes, an after-hours check casher) while meeting custom demands, and without gouging their clients or adding weeks to a project’s lead time. Total Security Solutions have built everything from extra-deep trays for Motel 6 locations–large enough to pass towels to guests checking in, but still able to keep an armed bandit from slipping a pistol past the barrier–to specialized units for 24-hour pharmacies, police stations, and university offices..

“We’ll make whatever size,” Total Security Solutions vice president Jim Richards assures customers. “We obviously have the recessed and counter-mount deal trays, which come in standard sizes that we’ve stocked for years, but if someone has a specific size tray they need or want us to design, it’s all 18-gauge stainless that we can cut and bend to suit their situation.”