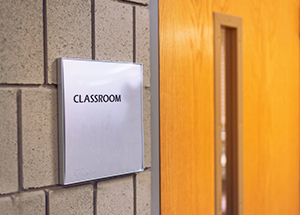 In December of last year Campus Safety magazine announced that they would immediately stop accepting advertising dollars from companies whose school door barricades fall short of safety and accessibility standards. As Campus Safety noted in their announcement, “these devices … could prevent individuals with disabilities and, under some circumstances, even persons who don’t have any disabilities from evacuating a building during an emergency, such as a fire.”

For those unfamiliar with these products, they’re a style of secondary door lock. “Door barricades” usually take the form of a wedge, bracket, or cleat that secures a door to the floor or its frame.

Retrofit school door barricade devices are dangerously out of line with safety guidelines and building codes.

Safe and Sound Schools has been especially vocal on this topic. Founded in the wake of the Sandy Hook school shooting, this group of Newtown, Connecticut parents, teachers, and community members is dedicated to supporting “school crisis prevention, response, and recovery, …to protect every school and every student, every day.”

Many commercial and improvised school door barricade devices are badly out of line with existing building codes, safety recommendations, and accessibility requirements.

Current ADA (Americans with Disabilities Act) standards require that all door hardware in a public building must be:

Unfortunately, many fire code enforcement agencies are starting to issue variances. These allow schools to install and use non-compliant devices—even those that defeat panic bars and other fire-exit emergency releases.

Let’s consider just one of the above requirements: mounting all door-securing hardware between 34 and 48 inches above the floor. This seems arbitrary. Most locking mechanisms are part of the door knob (or immediately above it), and door knobs are already regularly mounted 34 to 48 inches above the finished floor.

But the most popular secondary classroom door barricades anchor the door directly to the floor. While this is an extremely effective way to keep that door closed, this arrangement makes it functionally impossible for many otherwise able-bodied adults (for example, those who are using a wheelchair, walker, or cane) to open the door.

Another popular secondary door barricade device works by blocking the scissor-action door closers at the top of a door. This is an excellent way to secure a door against an attacker. Unfortunately, it’s also inaccessible to most students and any adult with a mobility challenge. Even worse, these devices can’t be operated by many adult women. The average adult woman in the United States stands 5’4″, with just under seven feet of reach. She can just barely reach the scissor-action closer at the top of a standard door and is left with little leverage to operate any device at that height. A huge portion of entirely able-bodied adults aren’t tall enough to remove the device quickly in case of an evacuation.

Being able to quickly evacuate a classroom outweighs needing to barricade one.

Between 2000 and 2013, the FBI documented roughy 160 active shooter attacks. These resulted in a total of 487 deaths and 557 injuries. In cases where we can clearly compare strategies and outcomes (such as with the Virginia Tech shooting in 2007), being able to securely barricade a classroom door proved highly effective at reducing injuries and fatalities.

But active shooter events like these are rare. Statistically speaking, only about 0.03% of schools ever suffer such an event.

Meanwhile, in the same thirteen-year period, there were roughly 60,000 school building fires. (NFPA has reported that, on average, there are four to five thousand school structure fires each year in the United States.) Nonetheless, few school fire injuries of students or staff are rare. Just 1.5 to 2 percent of school fires result in injuries.

More importantly, there are nearly no school fire related deaths in the U.S. each year. In an average year only one person will die in a school building fire, according to NFPA. This is because we have very high standards for accessibility and egress in a school emergency, and regularly drill students and staff on what to do in case of a fire.

Being able to evacuate in a quick and orderly fashion is vitally important. In the 1970s, you had 17 minutes to safely evacuate a burning building. Today, due to increasing use of synthetics in almost every building and furnishing product, you have just three minutes to escape a fire before toxic fumes do lasting damage. Any door securing mechanism that delays evacuation at all can prove debilitating or deadly.

Sobering Numbers on the Importance of Code-Compliant Exits and Doors

Imagine if schools installed door barricades nationwide. If even 0.1% of these devices jammed, that could result in four to five fires each year in which two dozen children were unable to evacuate the building. These are sobering and chilling numbers to consider.

“On the surface,” Jim notes, “these door barricades look great. I see people reacting to these things. They see pictures online, watch a YouTube video of a big burly guy totally unable to force that door open. They say ‘These look awesome!’ When they see how affordable that solution can be, they just get more enthusiastic. But do these actually work? Are they an effective tool—and do they accomplish that without creating new hazards? As someone who’s been doing this his entire career, I have some concerns.”