Hate crimes targeting religious groups are on the rise both in US and Canada. Unfortunately, law enforcement agencies still report having difficulty persuading religious organizations to directly address this terrible reality. A key concern that many congregants raise is that they do not want enhanced security to inadvertently exclude anyone.

As a result, many congregations resist coming to grips with the new and evolving threat landscape. We can side-step many controversial topics (armed guards, ALICE training, police presence, active shooter drills)—by investing in sustainable security improvements to houses of worship, community centers, and other targeted religious gathering places. But until now, doing that in a cost-conscious manner has often inadvertently lead to less welcoming gathering places. A new generation of security windows brings new options to houses of worship. They help increase congregant safety and provide better building efficiency and increased comfort.

Even Small Security Efforts Can Have Huge Impacts

It’s important to remind congregants and stake-holders that even very basic synagogue, mosque, and church security planning efforts pay off:

According to the Department of Homeland Security (DHS) officials, many survivors of the mass shooting at the Tree of Life Synagogue in Pittsburgh credit a prior security walkthrough with their survival. This routine building review made both synagogue officials and some congregants aware of seldom-used alternate exits. Indications are that this massacre might have been twice as deadly without this simple advanced measure. (Prior to the Pittsburgh attack, the most recent shooting targeting a Jewish house of worship in America had been in 1977. That attack resulted in a single fatality and one injury.)

Similarly, the gunman who sought out and murdered two people in a Kroger days before the Tree of Life murders did so after having attempted to attack the religious services at a historically black church nearby. He was unsuccessful because of a locked door.

But a large percentage of religious congregations are very hesitant to go even this far. They fear of creating an environment where someone might feel excluded or unwelcome.

Locking Our Doors and Opening Our Windows

In order to contain costs, improving security has often meant eliminating windows. Not only is this psychologically isolating, but it’s also a poor security compromise. When you get rid of windows, you rob building occupants of an opportunity to see trouble brewing and lock down—the best defensive strategy available for most congregations.

Eliminating windows may even run counter to important religious tenets or ethical practices. For example, many synagogues have long limited the number of clear windows in their sanctuaries for security reasons. But in recent years, rabbis have returned to older teachings arguing for the spiritual and ethical importance of having windows in a place of prayer.

What if we could increase the number of clear windows in our houses of worship? Religious groups could then increase security, locking doors and tightening access control, without creating the sense that anyone is locked out. 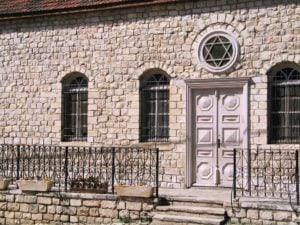 Total Security Solutions has partnered with a prominent U.S. glass manufacturer to start supplying a new kind of security window. These security windows will both prevent forced entry (like the security glazing most houses of worship and community centers already have) and stop bullets.

As TSS CEO Jim Richards explains, “This product was designed for schools. They have similar issues, in terms of needing to increase security without compromising the day-to-day well being of students and staff.”

TSS can readily retrofit this new type of security window into existing frames. It’s made from layers of laminated, hardened glass. This makes it easier to clean and care for than competing security glazings, in addition to imparting both a tested forced-entry rating and UL Level 1 bullet resistance.

In recent tests, it took more than nine minutes to breach a 36-inch by 60-inch piece of this glazing. All told, the sample security window withstood three shots from a 9mm pistol and nearly 300 strikes from a variety of hammers and a baseball bat. Even then, the hole in the security window was barely over four inches in diameter.

Nationwide, the average police emergency response time is under nine minutes. Being able to delay an attacker this effectively is an enormous tactical advantage.

These next-generation security windows aren’t just easier to maintain and more scratch-resistant than similar current solutions. They also include a patented “self-tinting” technology interlayer film—making them “dynamic glass.” This is an entirely passive technology (just like the self-tinting “transition lenses” available for eyeglasses). There is no wiring, no sensors, no controls—nothing to fail. Dynamic glass (even without any added security benefits) greatly reduces HVAC strain in any building and improves occupant comfort and privacy.

“This is the only glass like this on the market, worldwide,” Jim notes. “And it’s still priced comparably with other security windows. It’s a real ‘best of both worlds’ product. This is an investment that makes everyone’s life better every day—not just one that saves their life on one extremely terrible day.”

Religious congregations can take advantage of many of the same grant opportunities and security funding sources as schools.