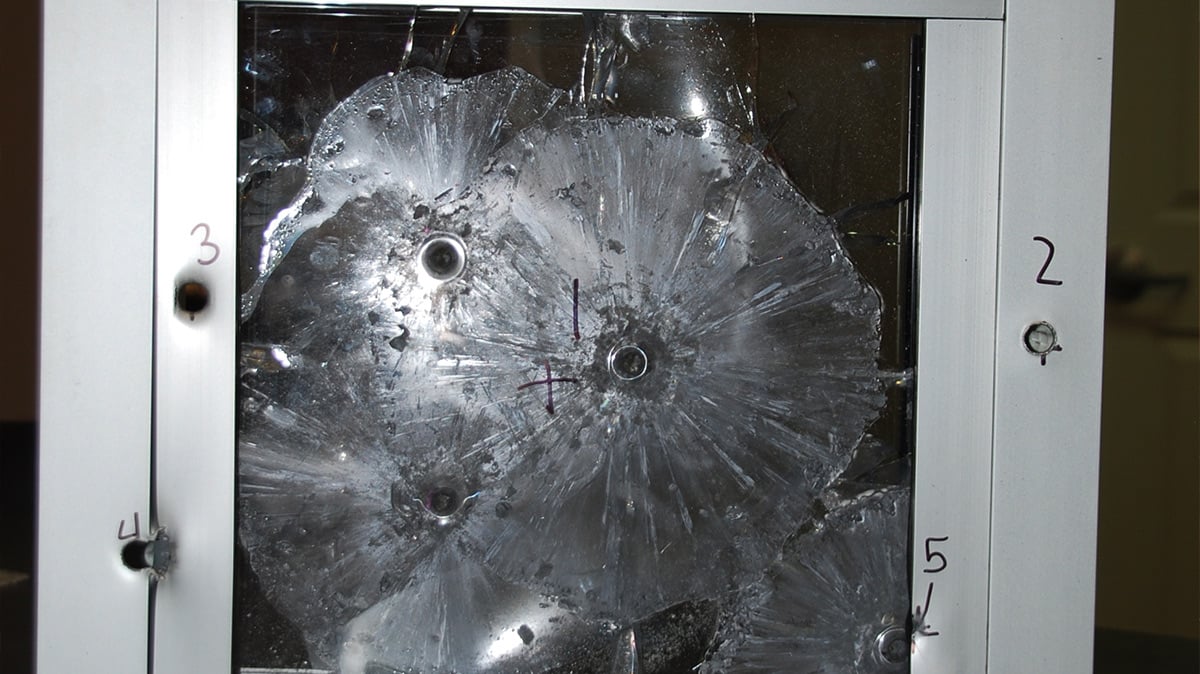 What does it mean? Which bulletproofing standards are best?

As to which is best, that depends on your application. In general, UL-rated materials are favored (or, in many cases, mandatory) in building construction. NIJ ratings are the gold standard for body armor. ASTM standards are most important when comparing materials in certain applications. They can be very helpful when evaluating some complex interactions of factors. (For example, trying to select among possible materials where attackers might try to force entry employing blunt objects, fire, and caustic chemicals.)

Understanding the background of each organization and its specific bulletproofing standards may prove helpful as you consider your options.

UL is a global safety certifications organization. Throughout the 20th Century, the UL organization was “Underwriter’s Laboratory” (often abbreviated “UL”). This was because of UL’s foundational role as an impartial third party that evaluated new and emerging technologies to determine their safety impacts. (An “underwriter” is a person or company that agrees to compensate another individual or organization for a loss. For example, “insurance underwriters” agree to reimburse you if your insured property is damaged.)

UL was established in 1894 as the “Underwriters’ Electrical Bureau,” a division of the National Board of Fire Underwriters.  As the name implies, their original role was to explore the safety ramifications of electricity. Specifically, UL was considering how electrification interacted with existing building materials. This allowed insurers to determine how to best gauge the increase in fire risk associated with the rapid electrification across the United States.

Today UL maintains over 1,500 standards. In order to claim that a specific product or component meets a specific UL standard, manufacturers must first submit it to an impartial nationally recognized testing laboratory (or “NRTL“). The NRTL performs tests meeting the published UL criteria and then reports on their findings. To qualify as NRTLs, labs must meet a set of standards set by the U.S. Occupational Safety and Health Administration (OSHA), which maintains the authoritative list of approved testing labs. As such, a UL-rated material carries the implicit backing of the U.S. federal government.

The UL752 “Standard for Bullet-Resisting Equipment” is, at its core, a construction standard. It covers both individual materials (such as a fiberglass panel or pieces of laminated glass) as well as fixtures made of many materials (like a bullet-resistant door with a frame or a set-in-place ballistic teller window).

The UL Standard specifically notes that, for the purposes of their standard, “bullet-resisting” means that the rated material prevents:

UL752 recognizes 10 levels of bullet resistance. Broadly speaking, Levels 1 through 3 are designed to stop three-shot clusters from various common pistols. Levels 4 through 8 are designed to stop one to five shots from various rifles and submachine guns (including the high-powered, sniper, and tactical rifles). Levels 9 and 10 are largely only used in military applications.

The UL752 rating system is generally considered the “gold standard” of bullet-resistant materials ratings for protective barriers and physical security. Not only is it the oldest and most often updated standard (first codified in 1937 and now in its 11th edition), it is also the most nuanced.

Most importantly, bearing a UL seal unambiguously means that the item in question has been independently verified to meet the UL standard.

Learn more about the 8 Levels of Bullet-Resistance 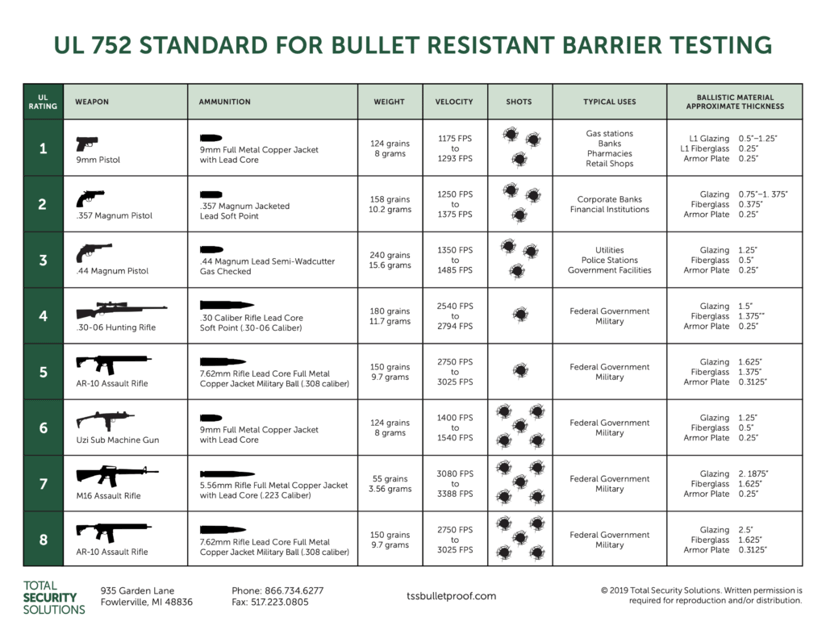 The next most common standard in ballistic building materials is “NIJ”. This refers to the ballistic resistance performance requirements and test methods established by the National Institute of Justice (NIJ).

The NIJ was founded in 1968 and significantly expanded in 1979. Their mission is to “encourage research and development to improve the criminal justice system and to disseminate the results to Federal, State, and local agencies.” NIJ took the lead in developing standards and testing soft body armor (i.e., “bulletproof vests”) for law enforcement back in the 1960s and 1970s. They continue to administer a program to test commercially available body armor for compliance with their minimum performance standards.

To this day, NIJ is mostly known for its body armor standard (i.e., NIJ Standard 0101.06). This standard was first released in 1972 and updated in 2014. But it doesn’t really have any bearing on building physical security. The appropriate NIJ standard for ballistic materials used in construction would be NIJ Standard 0108.01. This standard arises from the post-1979 expansion of NIJ. That included a significant increase in resources for methods and materials testing, research, and development. Although it is a short document, the ballistic resistance classifications (pp. 1 and 2, summary chart on p. 5) and testing method (pp. 6 thru 8) are quite detailed. This makes it popular because manufacturers can set up their own testing at a low cost.

NIJ Standard 0108.01 was released in 1981 and last updated in 1985. This matters because prior to 1986 most guns used in crimes were smaller caliber revolvers (five- or six-shot revolvers, usually either in .22 or .25 caliber). Since then, the most common pistols in America have been larger capacity (seven- to 18-round magazines) and in larger calibers (e.g., .380 and 9mm). The .50 caliber handgun (which can have a penetrating force like that of a high-powered rifle) came to market in 1986, after NIJ 0108.01 was last updated.

And in mind that anyone can test using NIJ’s detailed standard. If a manufacturer advertises that their product “meets the requirements of NIJ Standard 0108.01,” they are simply saying they’ve tested the material in accordance with the methods outlined in this 30-year-old document. (“NIJ Compliant” is a different matter altogether. This specifically means that the NIJ themselves tested the item and included it on their NIJ Compliant Products List. This is a service they only offer for body armor.)

Most builders prefer the UL752 standard to the NIJ standard because it is construction-specific, up-to-date, and independently verified. UL752 is also more nuanced and comprehensive. For example, a bulletproof window that is labeled to “meet NIJ III standards” may qualify for UL Level 5, Level 7, or Level 8 window. Or it may fall short of UL expectations altogether.

This international standards organization (formally known as “ASTM International”) began in 1898. At that time, it was the “American Society for Testing Materials”—a loose coalition of scientists and engineers who came together to address quality issues affecting railroad safety. Their first standard was for the steel used to fabricate train rails. This places ASTM among the longest-standing standards organizations in the world (although still a few years younger than UL).

By 1902, the group had expanded its scope and incorporated as the “American Section of the International Association for Testing Materials”. By 2001 they’d change the name once more—to the current “ASTM International.” Today, they have offices around the world and publish more than 12,000 globally recognized “voluntary consensus technical standards.” This covers a wide range of materials, products, systems, and services. ASTM is not involved in any way with enforcing compliance with its standards.

There are several ASTM standards that are important to physical security and safety in building construction. These include:

All these standards are primarily concerned with durability and provide excellent measures of blast- and forced entry resistance.

The standard most salient to ballistic barriers for structures would be ASTM F1233. This standard primarily focuses on forced entry. It determines the “class” of resistance to forced entry through impact testing with blunt and sharp tools, thermal stress (torch and extinguisher), and exposure to the chemicals gasoline and acetone. The test is progressive, repeated in particular sequences until failure. Importantly, ASTM F1233 defines two levels of failure. The first level of failure is the creation of a hole allowing the passage of a 1/8″ diameter object (so-called “passage of contraband”). The second is a breach allowing passage of a 5″ by 8″ by 8″ rectangular object (i.e., “body passage”).

Current versions of the standard (drafted in 1998) include several ballistic ratings, as well as a method for including ballistic attacks in the forced-entry rating calculation. Their strictly ballistic ratings include 12 “classes” (similar to the 10 UL752 Levels), but generally, only require the material to stop between one and three shots. (Most UL752 ratings are for three-shot clusters, with the higher Levels 6, 7, and 8 specifying a five-shot burst from a submachine gun or tactical rifle.)

Jim Richards, CEO of Total Security Solutions, has decades of experience in the bulletproofing industry. During that time, his company has designed, engineered, fabricated, and installed more than 20,000 bullet-resistant barrier systems.

“Everyone in our field has followed a different path to get here,” Jim explains. “That’s good. Having different perspectives prevents us from all making the same assumptions and developing blind spots. Good competition drives everyone to bring their best.”

Some bulletproofing companies began as bullet-resistant window manufacturers and later began offering installations. Others are builders who happened into a couple of bank projects and found it was a good fit for them. You’ll also find glaziers who were working with laminated products, aftermarket films, and security glazing, which naturally brought them into contact with true ballistic materials. And, some security organizations come from a military or law enforcement or security background and have branched out to meet the needs of their clients. Ballistic experts come from different backgrounds, so they may have different levels of familiarity with different rating standards.

“People tend to stick with what they know,” Jim points out. “Someone who has come out of a law enforcement background, they’re going to be familiar with NIJ standards. It’s a name they trust. A glazier or a materials manufacturer might be more comfortable with ASTM standards. And a builder is probably most accustomed to UL752 and other UL standards. What’s most important is that you understand what you’re getting. That means that, regardless of which standard someone is using, a third-party lab has independently tested those materials in that configuration and confirmed that the item will stop a certain number of bullets at these calibers at this distance. If a company can’t show you that, then what they’re selling isn’t bulletproof. It’s just wishful thinking.”