The History Of Bulletproof Glass 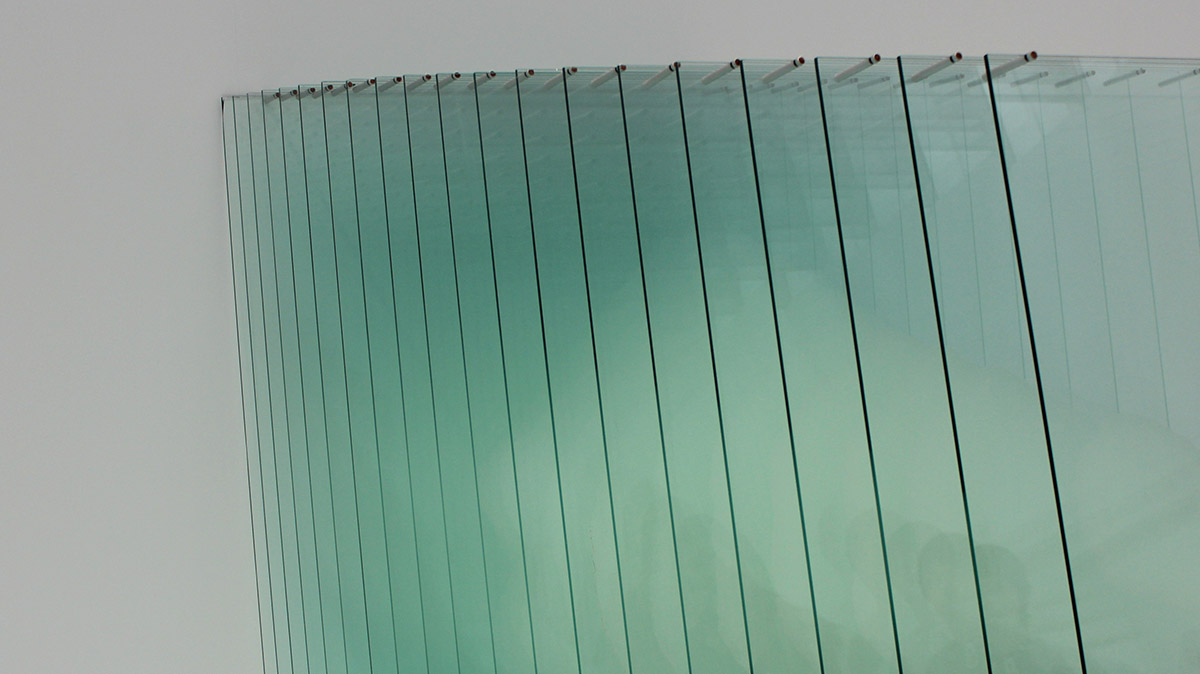 Winter is a popular time to take a tropical getaway and enjoy a white sandy beach. What you may not know is that common beach sand is actually the primary ingredient in the creation of glass. It’s also the start of the history of the glass timeline that takes us from tiny beads to bullet-resistant barriers.

Not all sand is suited to glassmaking. The properties sought after for the perfect beach getaway—fine, smooth sand that stays cool under your feet—are actually the same properties that make for the best glass.

If you want the highest quality glass in both transparency and color, you need silica sand. That’s comprised mostly of quartz. White sand can be an indicator of the presence of silica. But it could also be the result of tiny pieces of coral and other sea creatures. (This is more common in many of the low-latitude beaches.)

The sand at Whitehaven Beach in Australia, however, consists of 98% pure silica. It is so white that it actually reflects the heat and remains cool to walk on. In the United States, Siesta Key in Florida is well-known for its white silica sand beach.

History of Glass Timeline: Window Glass Through the Ages

It seems likely that glassmaking began around 1500 BCE. The first glass items were decorative beads produced in the coastal sands of northern Syria, Mesopotamia, or Egypt. Artisans quickly developed new techniques and expanded their offerings to include a wide range of decorative items, bottles, vases, and other everyday items.

But it took nearly another thousand years for Romans to expand their glassmaking to include architectural uses. Even then, Romans mostly made windows of glassy pebbles. These allowed some light through but were rarely transparent.

Clear glass panes first came about a century or more later. Artisans make such panes by blowing a cylindrical bubble in the glass, slicing it in half, and flattening it out. Interestingly, although this technology was still known, it was largely abandoned as the Roman empire shrank and collapsed. By the Dark Ages, only churches had glass windows. Residential windows—even for the wealthy—were often left glassless with only wooden shutters to provide warmth. As the Middle Ages progressed, the development of crown glass revitalized glassmaking. Crown glass is created by spinning the glass into a flattened disc. Windows created with the crown glass technique look like a series of bottle bases inside lead panes.

The earliest forms of architectural glass were far too costly for everyday use. Clear windows were reserved for the most important buildings in Rome. Despite various changes in glass production over the years, windows continued to be a luxury for centuries. In 1696, England even started taxing homeowners based on the number of glass windows a home had. Windows were an easily verified gauge of wealth. By the time this tax was finally repealed (two hundred years later), the cost of cast plate glass had dropped nearly 50%.

Still, it wasn’t until the early 1950s that glass was truly available to the masses. That came with the development of automated float glass manufacturing, providing consistently high-quality glass at a moderate cost. The glassworks pours molten glass onto a tin bath, where it can spread out smoothly. (This continues to be the most widely used method for producing flat glass panes today.)

Another breakthrough in the architectural glass industry was the advancement of steelmaking. With steel frames to support a building, architects and builders could craft walls entirely of gla­ss. The first all-glass “curtain wall” of this type was installed in New York City’s Lever House in 1952.

The Chemical Components Of Ordinary Glass 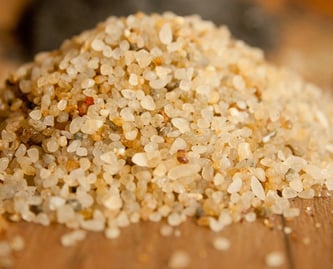 While applying heat to pure silica alone in its natural state can create glass, it has an extremely high melting point and is difficult to shape in its molten form. In 1945, when US scientists were testing a nuclear bomb in the New Mexico desert, the explosion actually turned the nearby sand into glass.

To be able to produce glass at a lower temperature, additional compounds—including soda ash (sodium carbonate) and limestone (calcium carbonate)—are added. The soda ash lowers the temperature necessary to make glass, but it also produces a glass that would dissolve in water. The addition of limestone stops this from happening. The final result is soda-lime-silica glass, the most commonly used glass today.

Glassmakers can add other chemicals, depending on the purpose of the glass. For example, crystal dinnerware includes lead oxide to add sparkle. “True crystal,” in industry terms, must contain at least 24% lead. Manufacturers add lanthanum oxide in glass eyewear for its refractive properties. To achieve various colors, they might add iron, copper oxide, or sulfur to the glass. A slight green hue to a sheet of glass is the result of iron. Other additives—such as boric oxide and aluminum oxide—increase the strength, heat resistance, and durability of glass.

But to create glazing strong enough to stop blasts and bullets, we need two more technological leaps: tempering and lamination.

Tempered glass has its roots in an ultra-durable exploding glass novelty popularized by Prince Rupert of the Rhine in the 1660s. 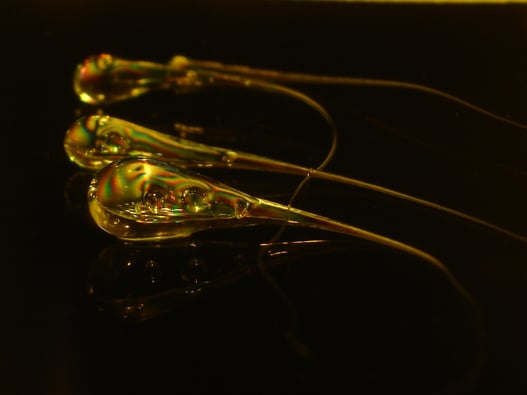 Prince Rupert didn’t invent these so-called “Prince Rupert’s Drops,” but showing them to his cousin (King Charles of England) brought them to the attention of the Royal Society of London.

The Royal Society was among the first—and undoubtedly among the most influential—groups dedicated to promoting the advancement of science and technology through experimental investigation. Their investigation into the unusual properties of Prince Rupert’s Drops ultimately led to the process of producing toughened (now called “tempered”) glass.

When molten glass is rapidly cooled (as it is when dribbled into a bucket of water—the process for making Prince Rupert’s Drops) the surface cools much faster than the core. This creates a shell around the hotter inner glass, further slowing its cooling. As the inside gradually cools, it contracts against the already hardened exterior. This creates a compressed chamber, tightly squeezing the interior glass. This compressive pressure makes the glass substantially more durable and lends itself to high impact resistance.

The idea of laminated glass evolved from another accident—this time, by the French chemist Edouard Benedictus in 1903. While working in his lab, Benedictus accidentally dropped a used beaker still coated in plastic cellulose nitrate from previous experiments. He noticed when the beaker hit the ground that it cracked but did not split apart into pieces.

Benedictus immediately saw the potential of this material to reduce fatalities in auto wrecks (where shards of broken windshield often brought drivers and passengers to a gory end), but that industry didn’t widely adopt laminated safety glass for decades. Benedictus went on to register the first safety glass patent in 1909, after bonding a piece of plastic cellulose between two sheets of glass. Using the “Prince Rupert’s Drop” method of immediately chilling the glass, the safety glass becomes much stronger:

Laminated glass first saw widespread use in the eye-pieces for World War I gas masks. By World War II, sheets of tempered glass were being laminated into thick panes. These became the first ballistic glass windows, used in bunkers and troop vehicles. Even though new transparencies, like thick sheets of acrylic or polycarbonate, have largely replaced glass in most bullet-resistant systems, lamination has remained vital to bullet-resistant installations.

The bulk of the bulletproof glass installed today is a combination of glass and a thermoplastic like acrylic or polycarbonate laminated together with layers of urethane less than 1mm thick. That’s because glazings strong enough to stop modern bullets are going to be thick (several inches) and heavy, with relatively poor light transmission (often only letting through around 60% of the light). Combining materials via lamination allows glass makers to “tune” their transparency. They can preserve light transmission and durability while making a window that’s lighter and easier to fabricate.

For example, manufacturers make laminated polycarbonate by layering polycarbonate (a heavy-duty clear plastic) between two sheets of glass and laminating it all together. While a bullet will pierce the exterior glass layer of laminated polycarbonate, the inner layers absorb the bullet’s energy stopping it from penetrating through the entire piece of glass. The window can be just ¾”, 1″ or 1-1/4″ thick depending on the level of protection—less than half the thickness of an equivalent all-glass bulletproof window.

The Power of Lamination in Bulletproof Glass

An illustration of the contribution of that half-millimeter of urethane to the durability of laminated glass:

This video shows two-and-a-half inches of “bulletproof glass” (technically tempered) glass. That sounds impressive. After all, there are commercially available all-glass bullet-resistant windows of roughly this same thickness that carry a UL Level 10 rating (i.e., they can stop a single shot from a .50 cal). But in this video, a single .50-cal shot and a couple of standard hunting rifles demolish those 5 panes of tempered glass. Nearly three inches of hard tempered glass doesn’t even stop a .30-cal bullet, because the glass isn’t properly laminated.

For comparison, check out this video of a piece of properly tested, laminated bullet-resistant tempered glass being shot by the weapon for which it is rated:

Not only does it stop the bullets, but there is also no spalling. (“Spall” refers to chips of glass that can fly off and injure those on the protected side of the glass.) That’s because these sheets of 3/8-inch tempered glass are interspersed with super-thin layers of urethane. During the manufacturing process, these layers are sandwiched, pressed, and baked. The resulting piece of glass functions as a single sheet. When a bullet strikes the first surface, it breaks the glass on the threat side, but the rubbery urethane holds the pieces in place. It acts like a trampoline, flexing without tearing. This eats up the bullet’s kinetic energy, leaving it unable to pierce the entire barrier.

In the first video, it’s pretty clear that the “bulletproof glass” is just a stack of unlamented glass. The bullet hits the first sheet, shatters it, and the shards fly out, making way for the bullet to keep driving forward. It’s little wonder that the hunting rifle shots got through. With a few shots, they probably could have broken all 2.5 inches with a pistol, even though just an inch of properly laminated glass can stop a 9mm.

The way we manufacture glass has come a long way over the last several thousand years. Bulletproof glass solutions are a small portion of that timeline, but some of the most important. Total Security Solutions are your experts on which application is best for you. Give us a call today to get started on protecting your assets with the best products and the most knowledgeable team in the business!