Workplaces across the United States begin to reopen this month. There are four factors that are likely to have a disproportionate impact on the “new normal” for workplace safety:

Total Security Solutions CEO Jim Richards points out that the stress of lockdown and the constant news of the growing pandemic has made people extremely risk sensitive. “It’s gonna take a while to get people back out. That’s human nature. Seeing safety measures in place is going to play a major role in getting people out of the house and back to their regular lives sooner.”

This is perhaps the most easily understood factor shaping the “New Normal” in the American workplace: More than half of all American workers have lost income during the coronavirus lockdown. More than a third of all workers either lost their job altogether, or have been furloughed without pay. As of this writing, more than 17 million Americans have applied for unemployment, amounting to a 13 percent unemployment rate (or higher—many millions of Americans are locked out of overburdened unemployment computer systems).

The obvious risk is that people in desperate economic situations may turn to take drastic measures. Right now, that seems unlikely: crime has actually dropped globally during the coronavirus lockdown. Last month The Guardian reported that in Chicago (“one of the most violent places in the US” according to this UK-based newspaper) drug arrests declined 42 percent since the shutdown, with violent crime in general down 10 percent. Los Angeles saw a 30 percent drop in crime. In New York—the US city hardest hit by the coronavirus—major crimes (e.g., murder, rape, robbery, burglary, assault) decreased 12 percent, even though almost 20 percent of their police force was out sick (a third of them diagnosed with COVID-19).

The greater risk to workplace safety comes as the economy begins to recover. Polls show that more than 80 percent of the workers who’ve lost income or jobs believe they will get this back in the next six months. But that is far from certain. Many economists are now predicting a “W-shaped” economic recovery. In other words, there’s likely to be a second lockdown—and with it more furloughs, lay-offs, and belt-tightening. These strains and disappointments create enormous potential for lashing out at the nearest target—maybe the former employer, or the utility office that’s sending third and fourth notices on delinquent bills.

Experts expect that the enormous disruption to regular life (schools closed, businesses shuttered, jobs lost, financial hardships) will be compounded by the forced close-quarters of lockdown. This increases stress within families, and is almost certainly driving an increase in domestic disputes and domestic violence. Many communities are already seeing an uptick in calls to domestic violence hotlines and reports of domestic violence to law enforcement.

We know that domestic violence seeps out into every facet of the victim’s life. The number one cause of death for women in the workplace is homicide. In 90% of these cases, the attacker is known to the female victim (typically a domestic partner).

Because many (and often the worst) incidents of workplace violence are best understood as spillover domestic violence, there’s a risk that this increase in domestic disputes will lead to a spike a broad decrease in workplace safety as the nation re-opens.

Gun Sales Jumped During the Pandemic

Without a doubt, there are many more guns floating around now than there were prior to the coronavirus outbreak. Americans bought about two million guns in the first several weeks of the pandemic lockdown. That’s a sales rate roughly 60 percent higher than the norm. (This made March 2020 the second-busiest month ever for gun sales.) Those sales weren’t equally distributed across the United States, according to an analysis by the New York Times. Sales doubled in many states. In Michigan (a state especially hard hit by coronavirus and economic hardship) gun sales more than tripled.

In case it doesn’t go without saying, increased gun sales and ownership aren’t concerning by themselves. As we explained earlier, crime has dropped during the coronavirus lockdown.

But we know there is a relationship between the prevalence of guns in a community and workplace safety. Research has found a strong correlation between access to firearms and deadly workplace shootings. For example, one study in North Carolina found that immediate access to a loaded firearm increased workplace shootings five fold. An analysis of fatal occupational injuries data from the U.S. Bureau of Labor Statistics (adjusted for population size and compared to estimated rates of gun ownership) demonstrates this close inter-relationship: 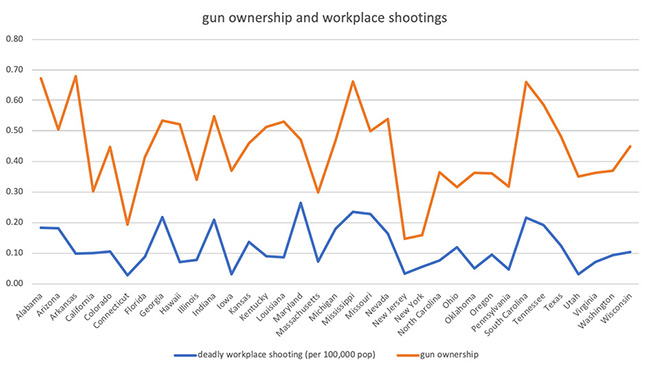 (The chart shows data from 2018, the most recent year for which the BLS has released comprehensive workplace injury/fatality numbers, and only compares states that had at least one fatal workplace shooting recorded in 2018.)

The Return of the Virus Next Fall

We all expect to be back to work by the summer. But Robert Redfield, the Director of the Centers for Disease Control and Prevention, has been extremely clear: we should expect a second (potentially more deadly) wave of coronavirus and COVID-19 cases come fall. There’s an established pattern for influenza-like viruses. For example, during the 2009 H1N1 swine flu pandemic, we saw a first wave in the spring, followed by a second, larger wave that fall.

In the case of a Fall 2020 return of coronavirus, this second wave will coincide with the regular flu season. Although we often downplay seasonal flu, it’s important to keep in mind that by itself the plain-old influenza often strains hospital resources. And that’s a well-established virus for which we have vaccines, greatly reducing the number and severity of cases.

There is unlikely to be a corona vaccine by fall 2020. As such, the CDC director stressed that the return of coronavirus will necessitate another round of social distancing, noting “the enormous [protective] impact that had on this outbreak in our nation.”

Businesses need to start taking measures now now to be ready to stay open—and safe—during a fall wave of seasonal flu and coronavirus.  But nonetheless, widespread social distancing—even if less extreme than this first round—will still have a chilling effect on the economy. (An effect that will be more pronounced if a large percentage of families are once again home with children who are out of school, either due to illness or preventative school closures.) That will mean a compounding of the economic and household stressors we discussed earlier.

“People are nervous that there’s a certain amount of civil disorder that might come … institutions are not operating normally. They may have an anxiety about protecting themselves if the organs of state are starting to erode.”

Total Security Solutions CEO Jim Richards is quick to point out that we see no real threat of societal collapse, mass civil unrest, or an “eroded state.” But widespread anxiety is real, and this stress has a real negative impacts on our lives. Strain goads little disagreements into huge fights, causes level-headed people to be hesitant to invest or spend money, keeps businesses that could be open closed out of fear, and increases the likelihood that desperate people will believe that have “no other options.”

All of that is part of the “New Normal” for businesses. And it’s going to mean more sneeze guards and locked doors, temperature checks and face masks, people keeping their distance, and businesses limiting hours.

But this is going to pass.

Keeping Perspective as We Return to “Business as Usual”

“Think about after 9/11,” Jim advises. “There was a period when people were very scared to travel, to get on airplanes, to go to large events. We always had that event in the back of our mind. But we got to a point where we got some perspective. This thing happened. But it wasn’t happening every day or every week or every month. How long does it take us to get to that point? Six months? Eight months? A year? Once we see what the real data tells us, we’re going to come back to what this country was built on: The freedoms, the enjoyments, and those personal connections.”

But until then, we need to make—and embrace—a few changes that will increase the comfort, safety, and health of our families, employees, and customers.