The Increasing Need to Protect Police Stations from Active Shooters

The public is conditioned to assume that police stations are safe from active shooter events and other threats. This can lead to lawmakers underinvesting in improvements to police station security.

Recent data from the National Law Enforcement Officers Memorial Fund (NLEOMF) found a sharp uptick in ambush-style attacks targeting law enforcement in 2016. Just within the last year there’ve been drive-by and sniper shootings targeting police stations in Dallas and Indianapolis, and an officer apparently assassinated outside of San Antonio police department headquarters. Many departments are finding themselves fundamentally reassessing their security needs.

As Total Security Solutions CEO Jim Richards recently explained, “It’s sort of a relief to work with a law enforcement agency on a bullet proofing project. With some clients you spend a lot of time talking them down from these really unnecessarily expensive systems. But police, they come in with very realistic expectations. Because they are in law enforcement, they understand the limitations of what can be protected without steep trade-offs. They understand risk.”

Unfortunately, those risks have been evolving.  Even as violent crime has seen a general downward trend over the last several decades, police in many locales throughout the country have faced increasingly frightening threats, with rifles and assault weapons used 10 times more often against law enforcement than average citizens.

“It used to be we hardly ever went higher than Level 3 on a police station.” A Level 3 system will stop several rounds from almost any handgun.” And we rarely had to worry about exterior windows or doors.  It was mostly a matter of securing reception areas and interior spaces.”

These are often fairly straightforward projects. But TSS has always been eager to take on projects calling for solutions both architecturally interesting and highly functional. This recent retrofit for the DeSoto Police Department in DeSoto, Texas is an example: 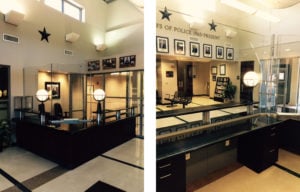 “Now, with these plotted attacks and ambushes, we’re having to change our approach. About half of the stations we do now are opting for Level 4 security,” which will stop shots from a high-powered rifle, in addition to shotgun blasts and any handgun. “We’re looking more at site lines and exposure from the outside. A lot of police stations favor a long exterior window-wall. This gives desk sergeants a good view of who is coming in, and also allows a panicked person seeking help to immediately zero in on who to talk to. There’s no way the officers are going to be willing to trade in on the value of being visible and having visibility. Instead, we’re replacing or back-glazing those windows to bring them up to where they’re going to stop rounds from a sniper or drive-by.”

“We just never thought of it before,” Jim notes,”Someone walking into a police station and shooting it up, because it’s a building full of cops with guns. We ask ourselves ‘Who in their right mind would do that?’ And the thing is, it’s not people in their right mind.”