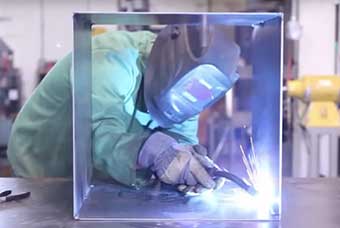 This past spring Total Security Solutions was contacted about a novel custom bulletproof barrier project. The client was a very high-profile foreign dignitary. The dignitary would be working and staying in a variety of locations across the United States – some of which badly need a security upgrade.

Two of these locations were in hotels, one on each coast. Once TSS designed, engineered, and fabricated the bulletproof barrier system, local contractors could handle installation (with TSS support). But the third location was an extremely large luxury home, and the property owners had no interest in permanently fortifying their mansion. Subsequently, TSS installers would travel to the site and secure the home with seamless temporary barriers.

In the normal course of business, delivering a job this size takes four to eight weeks. The industry standard for production time alone on a job like this is four weeks. And the client pins down all of the measurements, hard decisions, and final details in advance.

“We have an amazing crew [at Total Security Solutions],” explains TSS Operations Manager Tim Bean, “These guys will do whatever it takes to get this done. But it’s more than manufacturing. It’s logistics and trucking, too. It takes coordination from several different parties to actually make it come together.”

And that’s if you want it to come together in four weeks.

TSS didn’t have four weeks. They got the call on Monday. The dignitary’s security detail expected delivery by the following Friday.

Working Fast and Flexible to Craft a Custom Bulletproof Barrier

Tim laughs, “We did a lot of pricing at home, bought a lot of pizzas for the crews. I stayed here overnight with the production crew.” But as the work started, the dignitary’s security detail called with further requests, in essence doubling the job.

“You’re dealing with a customer,” Tim explains, “and a kind of person that when you say ‘That’s not possible,’ that doesn’t exist in their realm of thinking about the world. To them, it’s not that it’s not possible, it’s just that I’ll give you more money, and you’ll make it happen.”

For example, the level of security the dignitary’s team specified would normally require Level 8 transparency. Level 8 bullet resistant glass is a true glass product. Bulletproof glass manufacturers make it by laminating many layers of tempered glass and blast-rated polycarbonate with intervening layers of epoxy. It cannot be fabricated with conventional tools, and is generally produced on an as-needed basis.

“I don’t care who you call,” Tim says, “you can’t get Level 8 windows in 24 hours. You can’t get them in a week. They’re made in an autoclave; they’re specially glazed. If anyone else tells you that they can get you Level 8 glass to your size in a couple of days, they’re lying. It can’t be done.”

But this dignitary came from a place where “can’t be done” does not exist. So TSS flexed their engineering muscle, and designed a custom system of double layered Level 3 acrylic mounted in their proprietary framing. They mocked up a prototype, and the dignitary’s security team personally tested them to their specifications. The result was that the custom back-glazing stopped NATO 5.56 and Winchester .308 rounds – some of the hardest to block calibers.

“What would normally take us three to four weeks in production time, we got it out in 36 hours,” says Tim. “And we built to a security level that, at first glance, you’d say couldn’t be done, not on that timeline.” He concludes, “I think that’s what makes TSS so unique. We have the ability to act that fast because of the crew we have, our shop is very streamlined, we know what we’re doing, and we stock the product to be able to fulfill those orders. Jim [Richards, TSS’s CEO] is very good at forecasting, which means we have a lot of material on hand, and carry the inventory needed for seemingly one-in-a-million situations like this.”