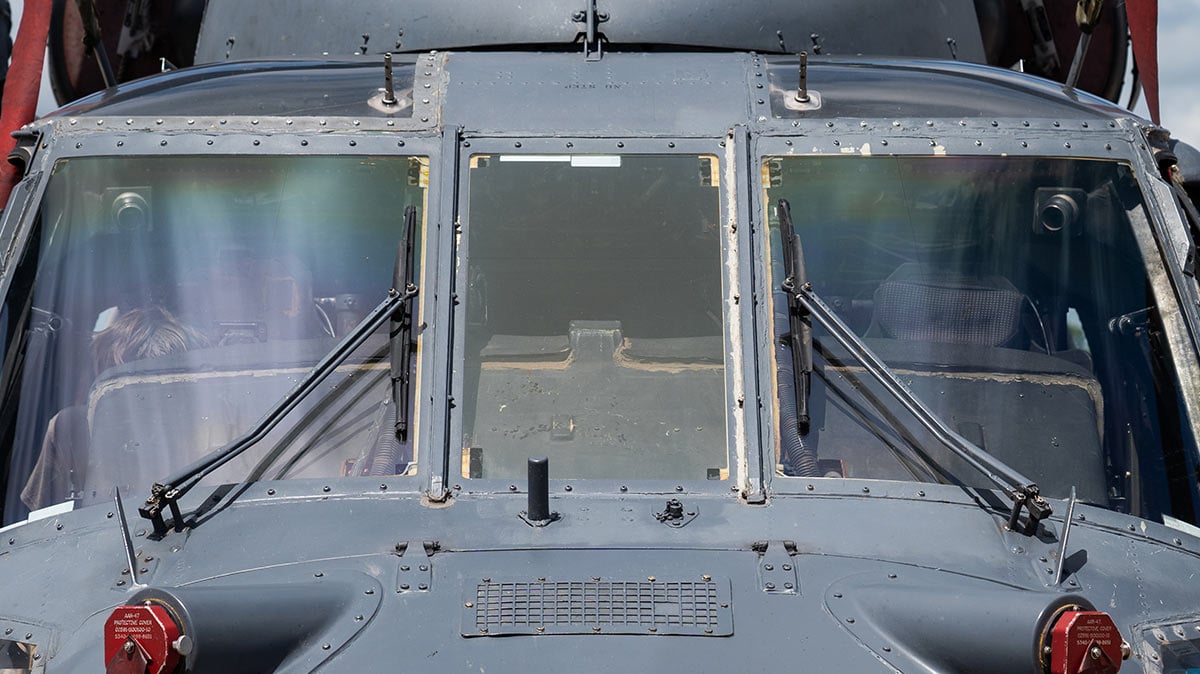 If the idea of a clear metal sounds straight out of science fiction, you’d be right – sort of. The first time most people heard about the idea of a see-through metal was when the character of Scotty proposed the use of “transparent aluminum” in the 1986 movie, Star Trek IV: The Voyage Home. In the film, this was just a science-fiction flight of fancy—transparent metal?! Impossible!

Little did most people know, researchers had been working on developing clear aluminum for decades. In fact, by the time the film hit theaters, patents had already been issued to the U.S. Army.

The Development of Transparent Aluminum

Research into the potential development of transparent metals began as early as the 1950s, but it really started to take off in the 1960s as part of several government-funded grants into materials sciences.

The Defense Advanced Research Projects Agency (DARPA) was created in 1958 in response to the Soviet launching of Sputnik 1 in 1957. DARPA funded a series of university-hosted laboratories in the early 1960s, largely to explore more modern options for materials that could help the U.S. better compete in the “Space Race.” Specific funds were put towards the study of infrared sensing, which in turn led to the development of a clear metal product.

Infrared (IR) technology has a broad range of uses, from electrical capabilities to thermography, communications, and defense applications. Unfortunately, most clear materials, like glasses and plastics, block Infrared light from passing through.

The thought process behind creating an optically clear aluminum product was that the material would be incredibly strong while also remaining transparent to infrared light. Some natural materials – most notably sapphire – are transparent to IR, but it’s prohibitively expensive to work with.

Researchers set out on a quest to develop what would later become known as clear aluminum or transparent aluminum.

James McCauley of the Army Materials and Mechanics Research Center did the foundational work in the 1970s. The Army then transferred the technology to Raytheon, which ultimately developed the first transparent aluminum window domes (mostly used to protect the missiles’ infrared sensors) in the 1980s.

The first method used to create a form of transparent aluminum involved a powdered aluminum-magnesium compound, but it was a somewhat cloudy material. This version is still used in some circumstances today, but the more widely known version used in recent years is “aluminum oxynitride,” a transparent aluminum-based ceramic known by the brand name ALON®.

In 2009, scientists at Oxford University discovered a new method of producing a transparent aluminum they described as a “new state of matter.” Using a new source of radiation with a specialized laser, they were able to develop a technology that can create thinner sheets of transparent aluminum – and other metals as well, to varying degrees of success.

This process has led to the use of transparent metals in a variety of applications. For example, imagine an unbreakable smartphone screen, a shatterproof laptop, or even unbreakable prescription eyeglass lenses. These are just a handful of applications undergoing research and testing at the time of this posting.

There’s a lot of excitement around the potential of where this newer technology can take us, but for now, we’re still in that exploratory stage where costs are high, and the technology isn’t widely available.

ALON is still the material that’s become synonymous with remarkably strong transparent aluminum. It’s not made entirely of metal, but its extreme clarity and incredible strength is pretty close to what Scotty likely had in mind.

How Transparent Aluminum – or ALON – is Made

ALON begins as a powder which is then molded and baked in very high heat. The heating process causes the powder to liquefy and cool quickly, leaving the molecules arranged in a cubic spinel crystal structure. It is this crystalline structure that provides ALON its level of strength and scratch resistance—four times that of “pure” fused-silica glass. It can handle temperatures up to 3812 ºF.

In terms of strength, ALON is as strong as rugged sapphire at a fraction of the price. It also has the added benefit that, unlike natural gemstones, optically clear aluminum can be manufactured in large sheets, domes, rods, tubes, and other shapes.

Polishing the aluminum oxynitride strengthens the material further and makes it extremely clear both to visible, ultraviolet, and infrared light. It also enhances the impact resistance of the material, which is why people sometimes consider transparent aluminum as an alternative to more common clear ballistic materials.

Most bulletproof glass is composed of multiple layers. Sometimes manufacturers laminate together several layers of tempered glass. Other times they’ll sandwich a layer of polycarbonate between two layers of glass. Or they might choose to bond layers together with other layered combinations of thermoplastics, glass, and urethane.

Transparent aluminum armor is usually composed of three layers: an outer layer of aluminum oxynitride, a middle layer of glass, and a rear layer of polymer backing. This layering process can make it sound like transparent aluminum has a lot in common with more traditional bulletproof glass options.

However, the similarities stop there.

It also stops larger bullets with a significantly thinner piece of material. For example, a .50-caliber armor-piercing bullet usually sinks nearly three inches into conventional bulletproof glass before stopping. Aluminum armor can stop it in half the distance—using a piece of material half the weight and thickness of traditional transparent armor.

Finally, transparent aluminum armor can be produced in virtually any shape and can weather the elements extremely well. This isn’t just important to the military, where bunker and tank windows need to withstand both shrapnel and days or weeks of wind-driven sand. It is also of great interest to NASA, which must produce structures and vehicles that can persist nearly maintenance-free for the foreseeable future. (There are no “we-come-to-you” mobile windshield replacement and repair services on Mars.)

All the benefits of ALON make it sound great – and it certainly has impressive capabilities – but it’s important to consider the cost. The reason it’s not (yet) in widespread use is the high price tag to produce. Transparent aluminum armor can cost anywhere from three to five times as much as premium bulletproof glass.

Further, until recently there was no infrastructure to produce the material in large panes. Prior to 2019, the largest ALON panel available was just three-square feet—smaller than the side window on most cars. As such, ALON was limited to smaller applications, such as the lenses in battlefield cameras or the windows over the sensors in missiles.

But in 2019 that changed. That’s when the US Air Force announced that the Air Force Research Laboratory (AFRL) and the Defense-wide Manufacturing Science and Technology Program had been working together since 2006 to improve the availability of transparent aluminum. That included supporting private companies, like Surmet, in developing new techniques and technologies that increase manufacturing capacity while reducing costs.

Surmet can now routinely manufacture transparent aluminum window panes up to eight square feet. The Department of Defense uses Surmet’s transparent metal on both Blackhawk and Chinook helicopters. NASA is also considering the material for windows and copulas on the International Space Station (where durability and impact resistance are mission-critical).

Still, the cost hasn’t yet leveled out to a price point that fits within most budgets. A great comparison is a calculation done in 2019 using aquariums as the common factor. It is estimated that a 180-gallon glass tank would normally cost around $2,000, but the same tank made from ALON would cost $63,360 to $95,040, just for the aluminum glass sides!

As new methods emerge, it’s certainly possible that the costs of transparent aluminum will come down over time. For now, though, it’s not the most sensible or realistic option for most projects.

The Evolution of Bullet-Resistant Materials

The Bulletproof Experts at Total Security Solutions don’t get many requests for ALON. Yes, it’s an incredible high-performance material—but that performance is in areas (like IR light transmission and stopping military ordinance) that few commercial customers need, especially when considering the high price-point.

“No one wants to pay the huge difference in cost for features they probably don’t need,” TSS CEO Jim Richards points out. “But there can be a sort of natural progression with these things. They start out extremely expensive, more of a curiosity. Then one day the military finds that they have a real-world use for it. They pour money into developing practical ways to get that material. That attracts innovation. We saw the same thing happen with bulletproof fiberglass. At one time, it was only produced by hand in small lots, all these little shops laying these panels up and cutting them to size. It was slow, it was labor-intensive, and that made it expensive.”

But that changed in the early 2000s, after 9/11 and with the start of the Iraq War. Demand for bulletproof fiberglass spiked, as did government spending on it. That attracted big players looking for big solutions. They found ways to mechanize the process and drive prices down.

“Today, any corner store can afford to add bulletproof fiberglass to their walls if they need it,” Jim explains. “Maybe we’re seeing the start of that with transparent metal armor. Ten years ago, they were only making pieces big enough to cover sensor arrays and lenses. Today, they are making windshields for Chinooks and the observation windows on the International Space Station. Twenty years from now, maybe it’s a standard option on trucks.”

Ballistic materials have continued to improve with time, and there are a wide variety of options with impressive bullet-resistant capabilities at far more reasonable price points than the transparent aluminum products available today. For more insights on which materials would work best on your next security installation, reach out to a TSS Bulletproof Consultant today.