A traditional “dangerous” job is dangerous because of the nature of the work itself. Think about agriculture, construction, lumbering, trucking, or commercial fishing. These are outdoor jobs. Those workers deal with large vehicles, dangerous weather conditions, and a significant risk of experiencing a fall or being struck by a falling object.

By contrast, retail work is indoors and usually low-impact. Yet retail worker deaths now account for roughly one-third of all workplace fatalities. And these are much more violent injuries and deaths. In traditional “dangerous jobs,” like construction, most fatalities come from vehicle accidents or falls. Most retail workplace deaths are homicide.

In the past, the most common instances of retail workplace homicides were during robberies. While that fact alone is awful, at least it lent itself to a clear survival strategy: if a worker remained calm and handed over money quickly, they would usually survive.

But conditions have changed.

The Changing Nature of Retail Violence

A recent study out of Eastern Connecticut State University highlighted how retail security risks and fatalities had changed in recent years. Mitchell Doucette and his team analyzed 1,533 instances of firearm-related workplace homicides between 2011 and 2015, comparing them to earlier workplace homicides. Prior to 2000, they found that 65% (or more) of all workplace homicides stemmed from a robbery. During the 2011–2015 period that the study focused on, robbery-related attacks decreased while non-robbery attacks increased. By 2015, the numbers had practically reversed, with most workplace homicides arising from some sort of personal conflict. (They ultimately published these findings in the journal Injury Epidemiology in 2019, under the title “Workplace Homicides Committed by Firearm: Recent Trends and Narrative Text Analysis.”)

Doucette also noted that “immediate and ready firearm access was commonly observed in argumentative workplace deaths.” This is especially concerning, given that we know the pandemic has flooded the country with more guns that are being handled less safely.

Doucette’s findings don’t surprise most people working in retail or loss prevention. Larry Hartman is director of risk management, loss prevention, and safety at Goodwill Industries of Central Florida. He has decades of experience in loss prevention, which generally sees the ugliest side of retail. In 2019 he told Loss Prevention Magazine, “These days it … takes less to put people off, to rub someone the wrong way. It’s a more sensitive environment now.”

Violence and Retail Security: Workers Face More Aggression than Ever

Robert Moraca, the National Retail Federation’s (NRF) vice president for loss prevention notes, “There is a level of violence that we’ve never really seen before, and it’s not just an active shooter or active assailant, but just more aggression in general.”

The NRF has surveyed retailers and found a consensus that in-store violence has grown. This is an issue retailers need to confront directly. In part, that comes down to simple economics. As Read Hayes (director of the Loss Prevention Research Council) observes, “People want to work in safe places and shop in safe places… Intimidation can be a killer to a retail company’s business because now you can get back in your car and order [online]. It’s a looming issue for retailers.”

But for most retailers, this goes much deeper than dollars and cents. “Retailers’ number one priority is the safety and security of their main assets,” explains Hedgie Bartol, business development manager for retail at Axis Communications, “their associates—as well customers, but we’ve been living for a decade in an environment where [loss prevention] is being asked to do more with less.”

Total Security Solutions CEO Jim Richards has decades of experience working with retailers to create safer workplace environments. And he’s found that attitudes and priorities have shifted quite a bit.

“In the past, when people thought about retail security, they really focused on shoplifting and robberies,” Jim explains. “That’s how all of this ended up falling in the laps of people in loss prevention. Today, we focus much more on protecting the people, not the assets. That’s in line with what we’ve said for a long time: your people are your most valuable assets. But that shift, it really strains loss prevention professionals.”

Protecting retail workers means more than stopping bullets during a hold-up. The daily anxiety about what might happen builds up over time. This is both a long-term and short-term drag on worker health and wellness.

“You get a disgruntled customer,” Jim says, “you get somebody coming in making threats or acting erratic. They don’t necessarily have to pull a gun and shoot somebody or do something to make that environment awful for the workers for a long, long time. And in some retail jobs, something like that can happen once a week, even once every day.”

Interior design offers a potent opportunity to take the strain off of retail workers—without getting in the way of them doing their jobs.

For example, TSS has designed, engineered, fabricated, and installed countless custom vertical slider units for retail businesses. During safer periods, stores can leave these windows open for unimpeded interactions with customers. In an emergency or during higher-risk hours, they can quickly lock the sliders down for enhanced security. 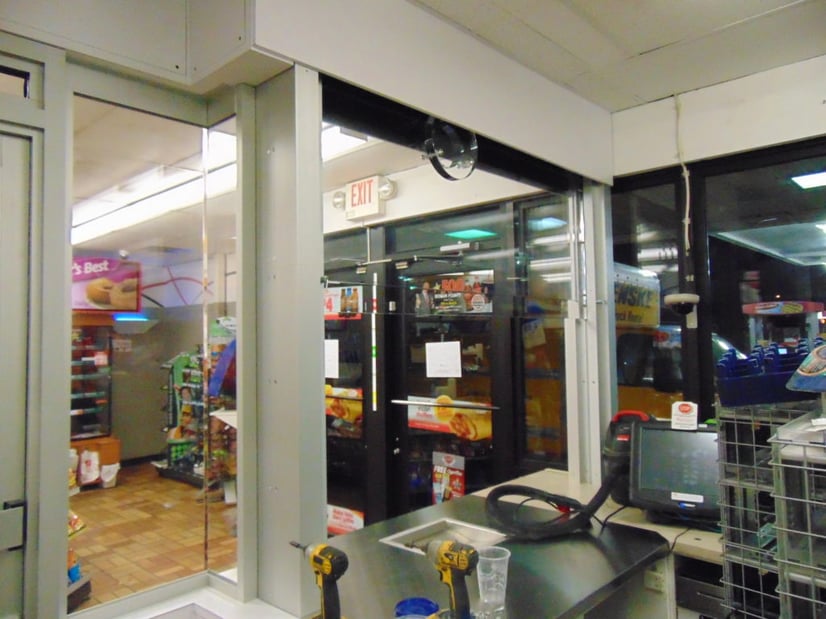 Open or closed, a well-designed slider is an attractive element. It can enhance the existing design while reinforcing important “territorial” elements that help deter crime.

“This is a good security solution specifically because it does more than one thing. If there ever is an armed conflict in the store, that barrier will stop a bullet. But in the more likely event that there’s a disgruntled customer or someone in a mental health crisis, or even a situation with civil unrest or rioting, that barrier being there helps bolster that worker’s confidence and safety. It gives them some psychological distance, so they can stay calm and make the right call in a situation where seconds count.”

This is just one example of a bullet-resistant barrier system TSS likes to use in a retail setting. It brings Safety + Aesthetics to a workplace with increasing security risks/instances. If you’re considering a bulletproof security system in your workplace, our experts have the knowledge and experience to consult on a barrier system that works for your unique environment.