For years, retail security solutions focused on loss prevention. This made sense: We’d enjoyed decades of crime reduction here in the United States.

But, according to experts, “2020 Will End as One of America’s Most Violent Years in Decades.” This trend is all the more surprising because many experts expected a decrease in violent crime in 2020. The belief was that stay-at-home orders and the chilling of public life during the pandemic would reduce the opportunities for violence. But TIME reports the opposite effect:

“Gun violence and gun crime have, in particular, risen drastically, with over 19,000 people killed in shootings and firearm-related incidents in 2020. That’s the highest death toll in over 20 years… [Also,] despite there being no ‘large-scale’ shootings in 2020, the number of mass shootings—which are classified as an incident in which four or more people are shot and injured or killed—has actually risen, drastically, to over 600, the most in the past five years and a nearly 50% increase in 2019’s total.”

TIME quotes Thomas Abt (director of the National Commission on COVID-19 and Criminal Justice), who explained “I think the best way to describe what’s happened in terms of violent crime is [as] sort of a perfect storm.”

Public health measures (such as remote schooling, social distancing, and stay-at-home orders) disrupted the economy. This had a triple effect:

Having children out of school further amplified the “violence interruption” breakdown. Schools are a vital channel by which public health and social welfare professionals get “early warnings” about brewing violence.

A Perfect Storm for Gun Violence

To top it all off, 2020 was a record-breaking year for gun sales in the U.S. Americans purchased millions of more guns than usual. More than half of those weapons (roughly 5 million) wound up with first-time gun owners.

First-time gun owners were already known to be at an elevated risk of suicide. But recent research additionally found that this effect was amplified in pandemic gun buyers, who also were more likely to store their guns in an insecure or unsafe manner. (Guns stored inconsistently or unsafely are almost three times more likely to be stolen, where they then go on to

This is a recipe for violence. As has increasingly been the case over the past several years, a disproportionate amount of this violence has ended up playing out in workplaces—especially retail settings. Retail fatalities account for roughly a third of all workplace fatalities—even though, in general, retail jobs are significantly less risky. “The jobs that have the highest fatality rates and frequency counts are found in outdoor occupations,” according to the Bureau of Labor Statistics. These include logging, construction, trucking, and commercial fishing or agriculture. Retail is, notably, not among them.

And the nature of these workplace fatalities is telling. For the “most dangerous” jobs—like farm work, construction, and trucking—most deaths are due to vehicular accidents or falls.  The most common cause of death in retail is homicide. In fact, more than one-quarter of all workplace homicide victims work in sales/retail. Most years, twice as many cashiers and sales reps die violent deaths on the job than police officers.

Last year also saw us reach an all-time-high for violent employee deaths during the commission of a study targeting crime in retail. 70 percent of the people killed on the job in retail died during a robbery, burglary, or theft. Another 20% were killed as part of a workplace dispute or targeted workplace violence (which are often spillover from domestic violence).

This appears to be part of a long-simmering trend in the United States. According to Pew Research, in 2018, U.S. retail locations saw around 475 violent deaths—a 12% increase from 2017. In-store criminal acts were likewise up 11% over the same period.  Two years later, violent deaths in retail are up again.

We similarly see a trend of violence increasingly entering the business itself. Historically, only around 30 to 40% of all retail deaths occurred in-store. (The remainder took place in parking areas, backlots, etc.) But over the last several years that number has steadily grown. In 2020, for the first time, we crossed a threshold: today, most retail-related deaths are now occurring inside the store itself.

Total Security Solutions CEO Jim Richards has been designing, engineering, fabricating, and installing custom bullet-resistant barriers and systems for decades. This has included a great variety of retail security solutions. In his work, he has seen these trends playing out over the last five years in real-time. 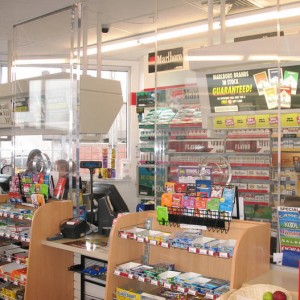 “Horizontal sliders” like these are popular in modern retail security solution

“Security levels are up across the board in retail,” Jim points out. “And trending toward higher-level barriers. The jeweler that used to go with a Level 1 barrier is now doing a Level 3. The late-night store that previously had no barrier at least has a transaction window. Also, the businesses enhancing their security have changed. You still see the convenience stores and gas stations, as you always have. What we’re seeing an uptick in is things like mobile phone stores, jewelers, pharmacies, and independent or regional fast-food chains. Also, of course, there are the newer industries like medical and recreational cannabis businesses, which didn’t even exist five years ago. Between the novelty of being new and the nature of what they deal in, those are retail settings with very acute security challenges.”

But the biggest change has been in the mindset. “It’s the workers [they want to protect] more so than the money. Seven or eight years ago these same sorts of businesses would be more concerned with money. That’s changed, and it’s a change for the better. I’m glad that people are protecting what’s really important.”

As the world changes and evolves, so should your work environment’s safety precautions. Total Security Solutions has experience crafting bulletproof barrier systems for all industry types, with a specialty in retail and convenience stores. Contact our sales team to learn more about what type of barrier system or accessories work best for your needs.